The charity was initially set up in 1907 by two sisters, Mrs E B Guard and Ms Agnes Grant. They cycled around Plymouth collecting stray cats and later moved on to helping dogs.

As animal numbers grew they set up a shelter in the city centre run solely by dedicated volunteers, which was officially named as the Plymouth Devonport and Stonehouse Dogs & Cats Home in 1908.

Eventually the number of animals being cared for outgrew the premises and a new plot of land was purchased in 1914 at Prince Rock in Cattedown. At some point the charity was renamed the Plymouth Dogs & Cats Home. Back then the surrounding area was not as built up as we see today. This site remained a safe haven for stray and unwanted dogs and cats until 1984. The home survived the First World War but was damaged in the Second World War. Luckily no animals were injured and Mrs Guard worked tirelessly to protect the animals. She even built an air raid shelter in the basement of her flat so she could help families with pets who were unable to take their pets to communal shelters. After the Second World War was over a great deal of rebuilding became necessary. 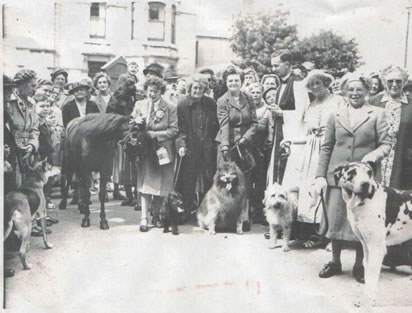 A photo from early in the Home’s history

In 1984 the charity’s third site was built in Cattedown to cope with the ever increasing number of unwanted and stray dogs and cats but by the late 1990’s was still lacking in space.

In 1999 a new purpose built 11 acre site was opened at Gables Farm – our current location. The charity was renamed Gables Farm Dogs & Cats Home in 2000, as it was found that many people thought that the local council funded the organisation due to reference of the city’s name. The charity was given a new charity number 1127194 in 2008, when the charity became incorporated.

With the help of dedicated staff, volunteers and supporters we continue the good work of our founders and look after 1000 cats and dogs every year. We shelter and rehome unwanted and abandoned dogs and cats. We provide constant veterinary care and attention to all of them during their stay with us.

We enforce a strict non-euthanasia policy, which means no healthy animal in our care is put to sleep. We’re also committed to providing the best environment possible. Our 11 acre site ensures that Gables cats and dogs have the most modern accommodation facilities available which in turn helps reduce certain behavioural problems that can develop amongst animals in care.